The Turin University Sports Center was founded in 1946, at the end of the Second World War, in a very complex socio-political context for Italy.The desire for rebirth after the lost war and a country in pieces, also starts from sport. In that period, in fact, Coppi and Bartali excelled in cycling, Zeno Colò in skiing, Adolfo Consolini in athletics and the Grande Torino is the strongest football team in the world.

The sports groups of university students are thus reorganized into CUS, University Sports Centers, and in this way the CUS Torino was born. The first President was Filippo Arrigo, but it was from the following year that Primo Nebiolo climbed to the helm, a man capable of internationalising the Turin University Sports Center, making it the first Italian club in terms of number of members.
Already the year following his first year in office, in 1948, Primo Nebiolo brought the first Italian University Championships to Turin, an event that the subalpine company organized also in 1961 and in 2011. 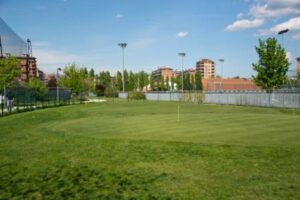 The great intuition of Primo Nebiolo, however, is to conceive the Universiade which was born in Turin in 1959. The event grows more and more, especially starting from the second Turin edition (sixth total) dated 1970.
In 1966 it is still Cus Torino, but in the mountain resort of Sestriere, to organize the IV Winter Olympics and 41 years later there is also an encore, one year after the 2006 Turin Winter Olympics.
Winter Universiade that CUS Torino will organise again in 2025, a clear sign that the will is to confirm the centrality of Turin on a global level when it comes to sports and universities.
The internationality of the Turin University Sports Center can also be seen in the organisation of other events, above all the “Primo Nebiolo” International Athletics Meeting, staged from 1963 to 1983 and then resumed from 1995 to 2012.

In 2005 the Golf section was also born at CUS Torino, with the creation of the driving range of Park Colonnetti, the first public one in Italy. A driving range where it is possible to train late, as it has been equipped with lighting.
To celebrate the new section in the best possible way, in 2006 the CUS Torino also organised the University World Golf Championships at the Circolo Golf Torino in Fiano Torinese.
Again, the event was part of a series of events in preparation for the Winter Universiade.